In addition to being “Pumpkin Capital of the World”, Morton has a long history of pottery production. For this reason the public school athletic teams are nicknamed “The Potters”. Following is a list of the potteries that operated in Morton over the years and the time span that they were in operation. 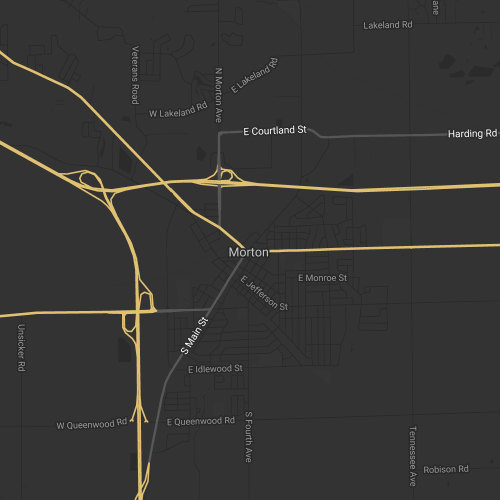 Morton’s first township meeting was held on April 2, 1850, in the home of W.W. Campbell, one of two brothers who owned land on both sides of Main Street in the original business section of Morton.

Early Morton Township meetings were held in various locations, such as the Campbell home, the schoolhouse, and the Library Hall. At a meeting held in the post office on April 1, 1873, a site for a township building was selected; and $1,000 was appropriated for the 24x36 foot one-story structure.

The township officers also voted for a sidewalk in front of the township building and hitching posts along the east and south sides of the lot.

On June 5, 1873, the lot, which had been decided upon, was offered by W.W. Campbell; and it was announced the building would be erected within a year. It was specified that no intoxicating liquor could be served in the building or the property would revert back to the previous owners.

In 1874 the first Morton Township meeting was held in the new building. The first township hall rental fee collected was five dollars for a dance. It was on June 27, 1929, that the Morton Gospel Mission, under the leadership of John Schlenker, started a weekly Thursday night service in the Morton Township Hall.

In later years this building provided a meeting place for the Morton Bethel Lutheran and the Blessed Sacrament churches, before their new church building were constructed.

In 1959, a new township building was erected on the same site as the first town hall, which was the corner of South Pershing and West Jefferson streets.

The new township building was erected by A. Stetzler and Sons at a cost of $30,037.48. This building was completed in August, 1959, and is presently being used.

Township government, established in Providence, Rhode Island in 1636, is the oldest existing unit of government continuing to serve on the North American continent.

The Declaration’s statement that “government should derive its just powers from the consent of the governed” is demonstrated at the Annual Town Meeting held on the second Tuesday of each April. The Annual Town Meeting is still an important function of our nation’s 17,000 townships after more than 370 years.

There are currently 1,433 townships in the state serving more than 8 million people.